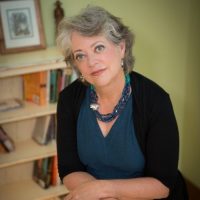 Ellen Cavendish Phillips, Event Artist, combines her love of nature, fascination with people and her whimsical imagination in her wide variety of artistic creations. As a double major in Art and Biology in college, she graduated and began working in the Biochemistry Department of Emory University while at the same time painting and teaching art. ​

After leaving Emory to raise her children, Ellen continued to paint, teach classes and attend workshops and in 1989 began to specialize in painting portraits. In 1994, she was commissioned by the DeKalb Co., GA, Chamber of Commerce to paint a portrait of Hank Aaron to be given as a gift to Mr. Aaron to commemorate the anniversary of his historic home run. ​

In 2002, Ellen began sculpture classes with Martin Dawes in Atlanta, GA. She found that working in three dimensions was the most fun and satisfying art she had ever done, so she began creating figurative sculpture. She also began to work in two and three dimensions creating paper lace cut banners and fabric art installations for churches. ​

In 2006, Ellen received her Certificate in Spiritual Formation from Columbia Theological Seminary. She continues to combine her artistic and sculptural talents to create art for worship, calling her liturgical art “Visual Prayer.” She also teaches and leads classes and workshops that study the relationship between creativity and spirituality.