Val Murphy Scholarships are financial awards given each year to allow persons to attend APCE’s Annual Event. The scholarships are given to honor E. Valeria Murphy, former APCE Cabinet member who served as an educator in a Presbyterian church from 1947 to 1963. Val Murphy was a pioneer for minorities in Church education, so it is fitting that scholarships in her name encourage cultural diversity, with preference given to minority persons serving in educational ministry in their local churches.

This month, we catch up with a few previous Val Murphy Scholarship recipients. 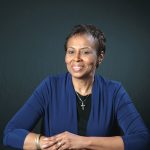 Angela Johnson came to the Presbyterian Church (U.S.A.) in 2012 after growing up a fourth generation Roman Catholic and spending a few years in the Baptist church. While studying at Louisville Presbyterian Theological Seminary (LPTS), Angela became active in a small, predominantly African-American congregation where there was no professional educator. As a student and church volunteer, she was active in the Christian education ministries within her congregation and was soon recommended to serve on the Christian education committee for her presbytery. A member of the presbytery committee invited her to consider getting involved with APCE and attending an Annual Event. Funds from the Val Murphy Scholarship allowed Angela to attend the Baltimore event in 2015.

Attending the Annual Event allowed Angela to see and appreciate the broad scope of Christian education in the Presbyterian Church. “I’m the CE person in my church – that’s the reality for so many small churches.” It can feel like you’re trying to navigate CE on your own. Meeting people—other Christian educators—having conversations, sharing stories, and sharing ideas encouraged me in my volunteer work. “When at APCE, the teaching part of my brain kicks in which stirs the CE part of my ministry.”

After graduating with an MDiv from LPTS, Angela remained in Louisville and now serves as pastor of Grace Hope Presbyterian Church, a small and growing, urban, African American congregation. She’s still the CE person in her church, along with fulfilling her pastoral duties. She draws on her connections and experiences at APCE Annual Events. When the Annual Event was held in Louisville in 2017, Angela was there. She volunteered with local arrangements while also enjoying connecting with the friends she’d made at the Baltimore event.

She particularly recalls a moving ritual enacted during the “In Memorium” service at the Annual Event. She adapted the ritual for use in her congregation’s Ash Wednesday service when four African American congregations gather to mark the start of Lent and remember loved ones who have died in the past year. People in the four churches look forward to the memorial ritual as an important part of this annual worship service.

Currently, Angela is working on her DMin project, which draws on her “teaching brain” and ideas she gleaned through her involvement with APCE. She’s developing a curriculum for a “Next Level” discipleship class aimed at adults who have completed new member classes. In the course, participants explore concrete ways to live as disciples in everyday life. Angela’s connection with APCE influences her curriculum development project.

Angela is grateful to the Christian education mentors in her presbytery who first pointed her toward APCE and helped her attend her first Annual Event. As her ministry has unfolded, she carries the relationships and stimulation afforded through APCE into her work and her studies.