The Mission of Brown Jesus

She sat in the middle of the crowd of about 100 students at a distinguished Christian university in Southern California. Following my keynote remarks titled “The Gospel and the Politics of Race,” she raised her hand sheepishly and asked the ten million dollar question: “How do you feel about missions?”

Thoughts swirled through my head. I remembered the moment I walked down the aisle of human bodies splayed out on blankets and lawn chairs; pitched on the side of a mountain at the Creation Festival in the early 1980s—high school. Tony Campolo invited the crowd of 13,000 Jesus followers to say “Yes” to Jesus wherever he might take us in the world. My colonized mind imagined going to the deepest darkest Africa—the scariest place, the most unknown place, the place where the natives don’t know they need Jesus.

I thought of the Urbana Missions Conference where I was so inspired by the stories of missionaries who had answered the call. They told stories of true renewal, dignity, transformation and healing brought by Jesus to people relegated to the margins of their societies. I wept hearing the stories decades ago and I am still inspired by them today.

But something has shifted since my age of innocence. Scales have fallen and masks have been removed. In 2016 the majority of white Christians supported Donald Trump’s candidacy for President. Many white Christians have continued to support his presidency, even after three years of children in cages and dying in detention centers on our southern border, Muslim bans, environmental degradation and deregulation, the denigration of women and denial of healthcare to the poorest and brownest women in our nation. To boot, the #MeToo and #ChurchToo movements have uncovered unchecked gender-based violence and abuse in church denominations across the ecumenical landscape.

The good news of Jesus Christ as shared and passed down by these same white churches’ mission agencies is showing itself to be mute in the face of oppression and worse—sometimes complicit.

So, when the young white woman raised her hand in the middle of the crowd of young white Christian college students and asked: “What do you think of missions?” I said this:

We are living in a transitional age, moving from an age of domination, empire and colonization into a —time of decolonization and self-actualization for those Jesus called the “least of these.” Missions, as we have known it, has been an agent of spiritual, cultural and economic western colonization. Western mission agencies have not yet interrogated western colonized understandings of the biblical text—a text written by and for brown, colonized, indigenous and serially enslaved people. Since the time of Constantine, Christian faith has been controlled by white western empire. Authority to determine the boundaries of Christian faith and the meaning of the biblical text has been centered in halls of European empires.

Until the western church does its homework—discerning what of their inheritance is Brown Jesus, what is European culture, and what reflects the demands of empire—then it cannot presume to bring Brown Jesus to post-colonizing nations. Nations struggling to see, protect, serve and cultivate the image of God within them and their inherent call to exercise agency to make decisions that shape the world—these nations do not need white Jesus. They do not need Jesus reshaped in the image of empire. They do not need colonized faith.

Black Brazilians and Aboriginal Australians and Xhosa South Africans and Indigenous Guatemalans and the indigenous peoples of the Americas—all post-colonizing peoples need the faith of Brown Mary, who became the first theologian in Luke’s Gospel when she broke into song at the news that the Messiah was about to be born: “He has brought down the powerful from their thrones and lifted up the lowly!”

You see? In the years since my walk down the aisle at the Creation Festival, I have come to reflect on the image of God as the centerpiece of the good news of Gospel of Jesus. On the first page of the Bible a company of priests exiting 70 years of enslavement in Babylon, proclaim that all humanity is created in the image of God! They did not have to write that. Every civilization up to that moment had only placed the image of God inside kings and queens—royalty. But these priests, who were exiting slavery and about to enter into their own rule in the Temple chose not to horde power for themselves. Rather, they cast it out for all humanity. On the first page of the Bible they democratize power.

And in case the reader does not understand, the priests add “and let them have dominion.” That word, “dominion” when translated from the Hebrew does not mean to subjugate unto obliteration. In context, it means something much more akin to stewardship. There is an even clearer picture of dominion in Genesis 2. God takes the human and places it in the garden and says “till and keep” it. Translated from the Hebrew these words mean “serve and protect”. Thus, to exercise God’s kind of dominion is to serve and protect creation.

The western missions project has served as a colonizing force, but not because it is inherently bad. The world does need Jesus—brown, colonized, indigenous Jesus. The world needs to hear his actual good news—that the King of the Kingdom of God has broken into the world to confront the kingdoms of men that are hell-bent on crushing the image of God on earth! The colonized ones need to see the image of God in themselves. They need to know that they, too, were called to exercise dominion on earth.

Until western missionaries have done their homework—until they have come to the place where they bow to Brown Jesus—until their gospel causes Brown Mary to jump and shout and break into song—they have no right to share Jesus with anyone. 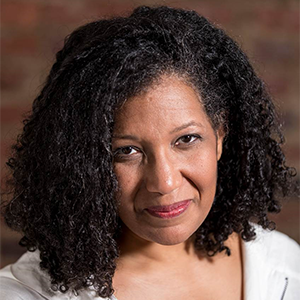 A prolific speaker, writer and activist, Ms. Harper is the founder and president of FreedomRoad.us, a consulting group dedicated to shrinking the narrative gap in our nation by convening forums and experiences that bring common understanding, common commitment, and common action toward a just world. Having earned her Masters degree in Human Rights from Columbia University in New York City, Ms. Harper served as Sojourners Chief Church Engagement Officer.  She is currently working on ordination in the Evangelical Covenant Church (covchurch.org) and serving as a columnist at Sojourners Magazine and an Auburn Theological Seminary Senior Fellow. Ms. Harper is the author of several books, including: Evangelical Does Not Equal Republican...or Democrat (The New Press, 2008), Left Right and Christ: Evangelical Faith in Politics (Elevate, 2011), Forgive Us: Confessions of a Compromised Faith (Zondervan, 2014), and the critically acclaimed, The Very Good Gospel: How Everything Wrong can be Made Right (Waterbrook, a division of Penguin Random House, 2016) which explores God’s intent for the wholeness of all relationships in light of today’s headlines. Website: www.lisasharonharper.com