A Last Hurrah for Christmas

Many have sung the repetitive carol, “The Twelve Days of Christmas.”

Many church leaders can (and have) explain(ed) our reasoning behind not singing Christmas carols in worship until Christmas Eve/Day and the twelve days after.

An intercultural congregation in Louisville, KY, celebrates the Twelfth Day of Christmas in an intentional way.

“It’s like a last hurrah for Christmas,” says the Rev. Marissa Galvan-Valle, stated supply pastor at Beechmont Presbyterian Church. “We have an annual Epiphany celebration each year to celebrate Latin American cultural traditions that might not otherwise be celebrated.”

The Beechmont congregation is comprised of members and friends from the U.S., Mexico, Puerto Rico, Sudan, and other African countries. The traditional Epiphany account of the magi coming from afar to worship the Christ child resonates with this church. It is believed that the magi traveled from different places and were united in their seeking and their gifting of the child, Jesus. 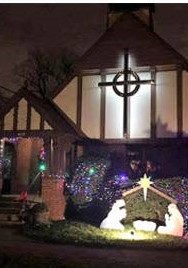 “A few years ago, a manger scene was set up in front of the church, but we don’t put the magi out until the Sunday closest to December 31. This is a visual reminder to our neighbors of the continued celebration of the Christmas season beyond December 25.”

In the congregation’s celebration of the Twelfth Day of Christmas, three members from three different ethnic groups dress as the magi and bring gifts to Jesus during the morning’s worship service. Also in worship, the magi distribute gifts to the children of the congregation, symbolizing the gifts of Jesus given to the children who “come unto him.” The worship service incorporates music from the wide musical traditions reflected in the congregation. Many hymns are taken from Glory to God, the newest Presbyterian hymnal. Church members also share and sing hymns and carols from their family celebrations, too.

The day of celebration continues after worship with a community-wide holiday feast. Members bring dishes from their traditional Epiphany celebrations, including tamales from Mexico; a peas and rice dish from Puerto Rico; and roast turkey from the U.S. A highlight of the meal is sharing the King’s Cake, a Mexican tradition that says the person who receives the baby Jesus figure in their slice will provide the King’s Cake for the following year.

After the meal, members take turns in trying to break a Mexican piñata. Everyone enjoys the treats found inside.

“We’ve also started to incorporate the giving of Epiphany star words,” states Galvan-Valle, noting a practice begun in U.S. churches where people receive Epiphany stars with biblical words printed on them, such as hope, love, peace, patience, and forgive. Each recipient is to meditate on their word for the year and share its meaning at the next Epiphany celebration. During the prelude to worship, a child carrying a large star leads the magi and congregation into the sanctuary to begin the service. The same child leads congregants from worship to the Epiphany feast at the close of the service.

Many of these Epiphany traditions show up in congregations across the U.S. What is unique at Beechmont is a gathering of all of these traditions into one celebration to mark Epiphany. They bring an emphasis of hope found in Matthew’s Gospel and Isaiah’s words that speak of all nations being included in the worship of Jesus. Where other congregations might mark our multi-cultural connections as Christians on Pentecost or World Communion Sunday, Beechmont’s Epiphany celebration is intentionally multi-cultural. “We celebrate all people being included in Jesus’ ministry,” Marissa adds. “This is the blessing of being part of a multi-cultural congregation.”