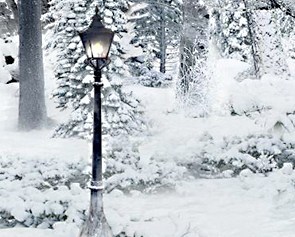 During the late 1940s and first half of the 1950s, C.S. Lewis wrote a series of seven books for his goddaughter Lucy called The Chronicles of Narnia.  The Lion, the Witch, and the Wardrobe is the most well-known in the series.  It is set during a long winter in the magical land of Narnia.  Laden with Christian imagery, this is the perfect setting to help us enter into the spirit of Advent.

In the middle of World War II, Peter, Susan, Edmund and Lucy Pevensie are sent to the country to live with a quiet, old professor in his very large, historic house. One day, while playing hide-and-seek, Lucy steps into an old wardrobe, pushing past the fur coats hanging inside, only to have them turn into tree branches as she walks further. Lucy is confused to step into a vast, dense forest – full of pine trees, in the dead of winter. Through the trees, she spots something even more puzzling: a bright street lamp lighting the scene.

A moment later, Lucy meets one of the inhabitants of this strange world, a faun named Mr. Tumnus, who explains that this lamppost is the boundary between the land of Narnia and the wild woods of the west. Later in the story of Narnia, we learn that this lamppost grew there because it was brought from our world–a piece of an old lamppost that was once wielded as a weapon by the White Witch, and discarded in the fresh soil of a newly-created world. Aslan, the magical lion who created Narnia, lit it himself as a promise and a reminder that he would return. Until that time, in Narnia, it is always winter but never Christmas. The magic of the White Witch, the supposed queen, keeps Narnia frozen, overcast, and dreary all year round.

Heidi Haverkamp, author of Advent in Narnia, tells us about the lamppost that Lucy encounters: “This lamppost is a living thing. No one lights it, no one extinguishes it, and it burns without fuel. The White Witch’s winter hasn’t snuffed it out. It is a boundary, but also a promise that Aslan can make broken things new and alive. It is a beacon in the face of the dark, cold spell that lies on the land.”[1]

What light are we following?

The people who walked in darkness

have seen a great light;

those who lived in a land of deep darkness—

on them light has shined.

For the yoke of their burden,

and the bar across their shoulders,

the rod of their oppressor,

you have broken as on the day of Midian.

For all the boots of the tramping warriors

and all the garments rolled in blood

shall be burned as fuel for the fire.

For a child has been born for us,

a son given to us;

authority rests upon his shoulders;

and he is named

Each year, we light Advent candles as a reminder that God has made us a promise.  Jesus, the light of the world, shines in the darkness as a beacon of hope, peace, joy and love. “A light that, like the lamppost, was there in the beginning with God. A Light that was broken and made new in the Resurrection.  A Light that shines through the darkness on all people.  A Light that beckons us to be curious and to come and see.”[2]

This Advent, be curious and be on the lookout for doors that need opening. Be as bold as Lucy stepping into the wardrobe, pushing forward until you find your way to Narnia. This Advent, look for places where you can be a beacon of hope, a reminder that Christ is coming again.

[1] Heidi Haverkamp, Advent in Narnia: Reflections for the Season, p. 4-5.

[2] Heidi Haverkamp, Advent in Narnia: Reflections for the Season, p. 4-5.