Poetry of a Lenten Journey 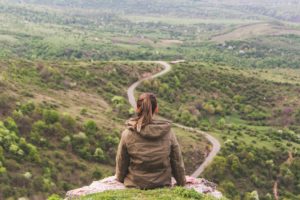 Thank you to Vlad Bagacian and unsplash.com for this image

Using words that resound with hope in the face of suffering and uncertainty, Isaiah 43 is one of this year’s lectionary texts for Lent. Reading this poetry with an eye to its themes and poetic beauty can help us find a path for our Lenten journey.

Isaiah 40-55 comes from the time of exile in the 6th century BCE, when Judah had been conquered by the Babylonian Empire. The elite of Jerusalem had been taken into exile, while the peasants had been left to work the land for the empire. For the exiles in Babylon, their questions were deep and numerous: Who was more powerful, their God or the Babylonian gods? What had they done wrong to deserve such punishment? Could God save them in a distant land? Did God even care?

In approaching any Scripture passage, it is helpful to consider its literary context. Isaiah 43:14-21 is part of a larger poem that runs from 43:1 – 44:8. This long poem is presented in five panels, like the movements of a symphony that interweave themes and refrains to build a musical whole. Our reading is the middle movement of the five. As always when reading biblical poetry, we see how theological themes emerge from repeated phrases and poetic images; Isaiah uses these poetic themes to convey God’s good news for the exiles in their despair.

First, Isaiah boldly proclaims that the God who sent him to the exiles is the Lord, Redeemer, the Holy One, the Creator, King. By this bold language, the prophet answers the people’s doubts about God’s reality and power, and assures them that God alone is God, despite all claims for the Babylonians gods.

A second theme emphasizes that God redeems the people. This God is with them—even in a foreign land. Just as God once made a way through the sea for the people to escape the Egyptian army, this God can just as powerfully save the people from the overwhelming empire of Babylon.

A third theme addresses the identity of those lost in exile, calling them Jacob and Israel, traditional names for God’s people. They are a people formed by and for God. This persuasive language answers the people’s despair about their identity crisis—even here in exile they remain God’s people.

In a fourth theme, Isaiah declares God’s “new thing”: a wonderful vision of the desert springing into bloom, the wilderness tamed, streams appearing where there once was only dryness and waste. If they will but listen, they will hear of renewed creation, peace, and wholeness, all made possible by their powerful, compassionate God.

Such themes sound more appropriate for the Easter season, and indeed such images of restoration and salvation were used by the early church to express the reality of a cross that became an empty tomb. However, on our spiritual journey through Lent, we need to dwell a while longer with this poem to see its resonance for where we find ourselves — between despair and hope, between confession and grace.

So back to the poem we go – always the place to focus. In the longer poem, this proclamation of hope is expressed in the face of a more sobering reality about what had led to the exile. In a startling contrast, the next “panel” of the poem (43:22-28) proclaims God’s accusation that confronts the people for behaviours and attitudes that had brought God’s punishment upon them. The words are harsh but just—

24 But you have burdened me with your sins;

you have wearied me with your iniquities.

and Israel to reviling.

This justification for why the people had suffered the consequences of turning away from the Lord fits into the poem as a whole. In particular, there are hints in the middle “panel” that tie the messages of the poem together.

Why does the prophet ruin the good feeling of the poem by including all this negative stuff? The coherence of the poem needs this theme to address the reality of those in exile. In spite of the people’s despair and loss, their exile is not unrelated to their past. The people had abandoned God’s ways, they had trusted in their own self-righteous arrogance and because of that, had forsaken God. The destruction and abandonment of the exile was just the outward sign of their iniquitous, inward reality.

To ignore this truth of who they had been would cheapen the grace they now receive. There is good news, but for it to be good news requires that they acknowledge how it was with them. Amid these verses about their guilt and punishment, God promises to “blot out your transgressions for my own sake” (v. 25). God’s restoration and forgiveness come even though the people had turned their backs on God. To pretend that they had done nothing wrong merely continues the arrogance, and thus the emptiness, of their previous delusions. To acknowledge how it really was with them, is truly to know and understand God’s deep and abiding graciousness.

These themes and messages accompany us on a Lenten journey. Lent is indeed the season when our path takes us through our delusions of innocence and righteousness toward an honest understanding of ourselves. In that honesty and humility, we don’t beat ourselves up, or just dwell on negativity. Rather, we confess how it is with us. Letting go of pretensions and arrogance to name our condition of need, failure, and hurt, is to be real in the face of our self-deceptions about both our failures and our uncertainties.

The willingness to say how it is with us allows us to hear the good news of God. The poetry of Isaiah weaves hope throughout verses of honesty and humility. This message is one that Isaiah’s audience could hear rightly because they admitted how it was with them, and we too can now hear rightly, when on our Lenten journey we admit how it is with us and so hear God’s grace in truth.

To hear an audio recording of Dr. Dutcher-Walls reading this article click HERE

is recently retired as Professor of Hebrew Bible at Vancouver School of Theology. She holds a Doctor of Theology in Old Testament from the Graduate Theological Union in Berkeley, CA and a Master of Divinity degree from Harvard Divinity School. She has published several books and a number of articles in scholarly and religious journals. With a love of teaching, she continues to lead adult education courses, retreats, and continuing education courses.